Week Five saw the team prepare for New Year, battle colds, shadow for their second week and very occasionally pop out to sample the festive nightlife of Verbier. The darts at Pub Mont Fort certainly became a welcome distraction from the Beer Pong competitions in the chalet…

The whole team started their second week of shadowing the instructors from Les Elfes and this week saw even more work being put in helping with lessons, picking up students who fell over and helping put on more skis than they could count. Teaching large groups of kids is really hard work for any instructor and the guys at Les Elfes only had good things to say about the help they got from the trainees.

But the end of the week meant not only the end of shadowing (and therefore the end of putting skis back on other people) and the annual New Year celebrations which take over resort. An appropriate reward for their hard work. Another reward for surviving the peak weeks was time spent with Emma’s dog Indie – the Element mascot.

But they say a picture paints a thousand words so here are some snaps of the week to whet your collective whistles: 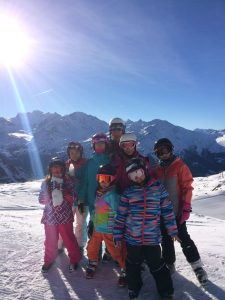